After the two-person attempt in a 17’ boat in 2018 Co Captians Robbie Stone and J.T Hawk had the entire drive home from northern Victoria Island to Lucasville, Ohio to dissect what went wrong.  According to J.T. Robbie brought up another attempt in 2020 before they were even off the island.  Robbie insists it was J.T. that started researching bigger boats that they could trailer from Ohio to Port Townsend, WA.  Either way while still licking the wounds of the 2018 attempt those two were plotting to give it another go.  By the time they arrived in Ohio they knew they were searching for Hobie 33, lifting keel version.  By August one was purchased and made the trip from Oaklahoma to J.T.’s residence near Jackson, MS. The Mississippi contingent proceeded to strip paint and fix broken things from the boat and trailer.  Sometime in October, the boat arrived in the hands of restoration magician Robbie at his New Jersy shop. By August it was ready for sea trials on the Chesapeake Bay.  The team made their first race in Kentucky Lake in October where the boat remained for a month of practice sailing. Currently the boat is back in the shop for another round of projects while attempting to be ready for the NOODS (National Offshore One-Design Regattas) in February.  To see more about the boat click here. 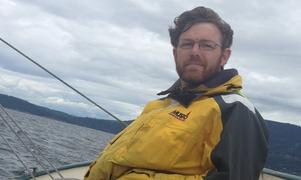 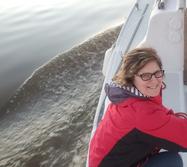 Welcome to Team Buckey Sailing's  R2AK 2020 Page.  Our goal is simple, to finish this darn race and have a blast doing it!

"This Race will change you”. these words were spoken to me by a previous racer on the dock in Port Townsend the day before we embarked for the 2018 race. It is the ambiguity of that statement that is so profound.  No matter what I do, or where I am, my thoughts never venture far from the Race to Alaska.  It’s become a part of me, a part that I struggle to explain, but a part that I offer no explanation for.  The wild nature of the race, the ridiculousness of all types of boats competing without classes, the wide-open spaces, the wind, and the current running at you like a school bus. These things may change those who experience them. Experiencing those changing effects with people I call friends, will make ringing that bell in Ketchikan one of the two best events of the year.  Wearing the R2AK blazer in September will be the second.  Hey Race Boss, I wear a size 44. 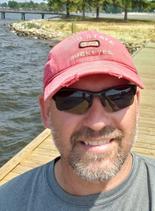 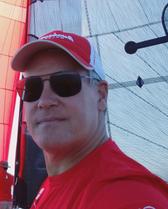 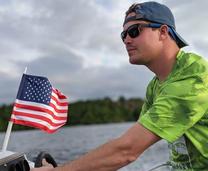 I am intrigued by the challenge and uniqueness that the R2AK brings. The technical difficulty of the route has been calling my name for years.  Add to this the incredible setting of the race, and the opportunity to experience mother nature's beauty and strength all in one adventure. The R2AK drew me in and took hold of me from the moment I first learned of it.  Since then I have been trying to work out the logistics of the race.  Even after building a boat, the reality of making it to the start line is daunting.  When I first saw that Team Buckeye was looking for additional crew I knew I wanted to explore the opportunity. Robbie and the team have a really positive ethos in their approach to this race that really resonated with me. I am excited to join Team Buckeye and the 2020 R2AK team. I hope to be able to join them in September and wear the R2AK blazer. I wear size 42.

Meet the Team (so far) 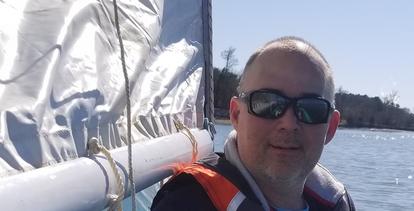 I love adventure and I always have, the R2AK may be one of the most unique adventures on the planet. In 2018 I became an accidental tracker junkie and spent a lot of time watching Team Buckeye’s adventure.  There is a point at which you realize that you are not so much following something, as you are living Vicariously through it. With each passing hour, I looked for updates and cheered the duo on from Mississippi. With each struggle I cringed, with each success I cheered. When they retired from the race I felt like my favorite team had just lost a close game. When JT returned and mentioned a bigger boat, a larger crew, and another attempt in 2020 I knew I wanted a spot on that team.  I could not imagine racing or ringing that bell in Ketchikan with anyone but Team Buckeye!  The only thing better might be putting on that blazer in September.  FYI Race HQ I wear a size 44.

J.T. Hawk
Big, and cool, that’s how I describe this race. I mean really big, as in bigger than life big, big like outer space big. No chance of me going into outer space, but sailing to Ketchikan I can do. On the cool factor scale, historically the R2AK is a 10, look it up.  Still not convinced? Just ask one of the cool kids in September, they will be the ones wearing the R2AK blazer – with sleeves. Breaking the boat and stopping short of Ketchikan in 2018 created an itch on top of my itch.  I plan to scratch that itch in 2020.  Being part of Team Buckeye, the epic journey of 2018, the sailing over the past 2 years has become a part of who I am. I can’t wait to race again in 2020 with Team Buckeye, cheating death, chasing R2AK glory, on a boat, with some of my favorite people. This will be the second coolest thing in 2020.  The number one coolest thing will be standing with these same people as we join the cool kids club and put on that blazer in September.  Hey R2AK guys, I wear a size 44.

When Robbie first started talking about the R2AK, I thought he was crazy, yet a part of me wanted to go with him.  A lot of reasons piled up to keep me home, work, the small boat, and the fact that I don’t like the cold; these are all at the top of my list. I went to support my husband and brother in 2018 and I really enjoyed the excitement of the race. I got to experience Port Townsend, I was able to watch the 5:00 a.m. start, before going to Victoria to greet Robbie and JT when they arrived. The entire event was an awesome experience. For the next several days I kept watching all of the information pouring in from the various teams and it made me realize that deep down I wanted to be there, cold or not.  For me, this race is one part a chance to experience everything that is R2AK and one part a chance to test myself in ways I never have before. Getting to compete in the race on Team Buckeye with my husband and brother will make finishing the race even that much more special.  I can’t wait to wear the blazer in September. I wear a size 10.

Engine-less sailing, that's cool and it requires an approach to piloting and boat handling that I find deeply rewarding; combining it with the Race just makes it even spicier.  The race itself covers some of the most beautiful stretches of water I have ever seen, and this offers me a chance to get back on the water again. Finding a crew is hard, and doing it without meeting and actually sailing together is even harder.  Team Buckeye's wrangler and chief has communicated the team goals clearly and in a way that aligns with my goals for the Race; be safe, have an adventure, and be fast. I look forward to joinning the the team in September and putting on the R2AK Blazer,  hey R2AK peeps I wear a size 42.