Was born in Honduras to missionary parents and he is the number two of five children. He grew up in Ohio, but he currently lives in Clinton, MS with his wife of 25 years Mitzi Hawk and his 13-year-old daughter, Summer.  He retired from the US Air Force in 2013 as a Captain with 24 years of active duty service.  JT works part time in the pro-shop at Live Oaks Golf Club and enjoys a multitude of outdoor activities to include sailboat racing, water skiing, snow skiing, golf, 5th wheel/hammock camping, scuba diving, corn hole tournaments, and extensive travel throughout the US, Mexico, Canada, Caribbean, and Honduras.  Obviously “retired” is a term that is used to describe his legal status with the United States Airforce and has nothing to with sitting on the couch.  If this isn’t enough he also fly’s volunteer missions for the US Air Force Civil Air Patrol. JT had this to say about the joining team Buckeye. “The reason I want to Race2Alaska boils down to my competitive nature. Growing up in a family of five children including two similarly competitive brothers and two in-your-face (when they win) sisters, I developed the desire to compete. This desire still burns strong at the ripe old age of 46.  So, when my brother-in-law Rob Stone, who I now consider a third brother, presented me with the opportunity to compete in the wild and wacky R2AK, I jumped at the chance to tackle what I consider to be a grand and epic adventure. There are going to be some boats out there faster than ours and some crews more experienced than us but don’t underestimates Team Buckeye's desire to compete. Mother Nature is a formidable beast who will require our best efforts and demands our respect, but she too will be hard pressed to damper the competitive spirit of the boys from the Buckeye State!"

Welcome to Team Buckeye Race to Alaska 2018 page.  We are competing in a boat that had  her small 17' hull laid the same year I was born, 1970.  Un-like me the boat is receiving a complete restoration. Click Here to see pictures and accounts of the process!

Robbie is from Minford, Ohio a small town 90 miles south of Columbus Ohio. He still lives near there with his wife Kitty and 4 of the 6 kids, 2 are in college. Saying he lives there is a bit like saying a commercial air liner is from one city.  He travels a lot, in fact the whole family travels a lot. Just look at their Facebook pages and you will see.  They have sailed together on Chesapeake Bay, Charleston Harbor, Watts bar lake, Tn, Rocky Fork Lake, Oh, South Port, NC, and many other places to numerous to mention.  Robbie obviously likes to live life to the fullest.  He is a PADI Scuba instructor, ANDI mixed gas diver and NACD full certified cave diver.  He is also a pilot with plenty of flight time in several different types of aircraft.  When he was younger he was a rock climber and he even taught high angle rope rescue.  Professionally he has worked in IT as a CIO (Chief Information Officer) for the past decade but was recently employed as the V.P. of Revenue Cycle Management for Alert Ambulance of Brick, NJ.  He had this to say about creating Team Buckeye and joing the R2AK “I stumbled across this race just after the first race finished.  I knew immediately that this was something I had to do, it was instantly in my blood. I am also competitive so entering a race that is over 2500 miles away I can’t win wasn’t an easy thing for me to do.  Getting away from my desk for more than a long weekend and going to Alaska is just a challenge that I have to take part in. This race is about having the grit to finish, I mean it’s a race to Alaska! Even the name sounds cool.” 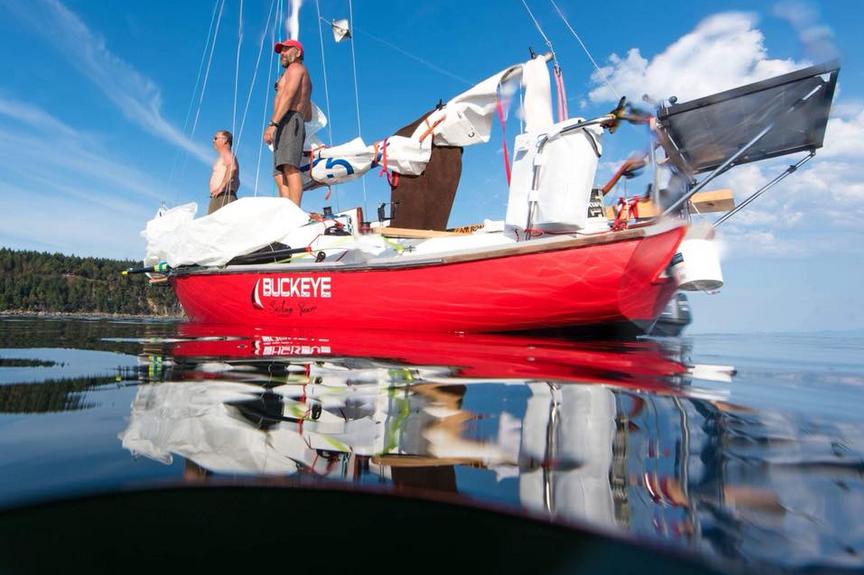