Before and after Pictures 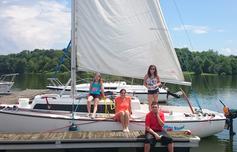 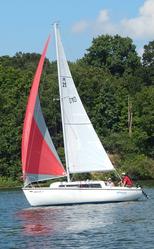 In the winter of 2010 I drove to Cleveland, Ohio to look at a used sailboat trailer for my O'Day 25.  When I arrived, I discovered that trailer had a boat on it.  When I asked the owner about this new development he informed that he "was only selling the trailer, the boat is free and the trailer is only for sale with the boat on it.”  I became the proud owner of an un-named Morgan 25. Complete with the 500 gallons of rain water she was filled with. I relocated her to some family property and there she sat for another 2 years.  I later sold the O’Day but kept the trailer.  When I moved my Offshore 40 to rural Ohio for a major restoration I realized that I no longer had a boat that I could sail.  That winter I put the soaking wet Morgan back on the original trailer. The restoration began with a lot of help from my wife and kids. Three years and dozens of races later I have come to love and respect this over built boat.  She is small, but built like a tank.  In light air - drink a beer and enjoy the company on board.  When the wind blows, and waves build - hold on!  We have raced this boat all over the mid-west including a 3rd place performance at Kentucky race week 2016.