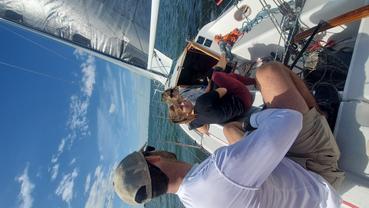 Our Facebook page offers more up to date information on the boat progress.

While driving home from a failed attempt at the R2AK 2018 in July of 2018, J.T. and I began discussing what went wrong. We had  2,748 miles to figure it out. Behind the truck was “Puissant” and still in the front of our minds was the crushing fact that we didn’t make it.  We quickly decided to concentrate on the 2020 attempt. We made a list of requirements for the next boat that went something like this:

Bigger
More Crew
Tow in all 50 states
Launch  without a lift
Capable offshore pedigree
Affordable – by my wife's definition, not mine!

Available - we needed to find one fast.

We quickly narrowed our list from a dozen or so boats to three, a thousand miles later we landed on the Hobie 33.  By August I was the proud owner of a Hobie 33 named “Knockout”.

When she pulled into my New Jersy Shop in October I realized she needed a bit more work than I had originally thought.  Then again the same could be said for every boat I have ever bought.  She showed signs of simple neglect. I suspect she sat in the water uncared for a number of years.  She also appeared to have been rode hard and put away wet more than a few times in her life.  My project began. I hope to find the time to blog about the restoration process.

Over a year later the boat is 75% through the restoration process.  We are now sailing her between times in the shop.  New carbon sails, 100% new hardware, running rigging, paint, motor, new name, and bottom fairing, have been completed. Interior, offshore modifications, a bowsprit, new Asymmetrical sails, a pedal drive and wrapping the sides are still on the list.

With 2 years of the Race to Alaska canceled we are racing another year on Lake Erie and select travel races. The boat was wrapped late last year and now 95% complete. 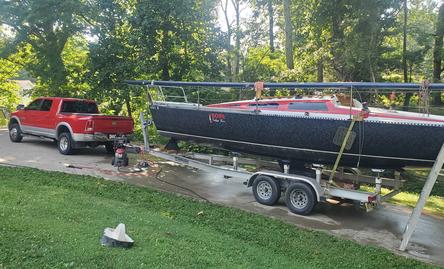